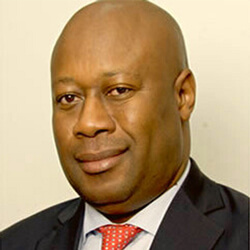 Winston Chitando is a Zimbabwean politician who serves in the government of Zimbabwe as Minister of Mines and Mining Development since September 2018 under the Zimbabwean President Emmerson Mnangagwa’s government.
Chitando joined Hwange Colliery Company in 1985, and worked for Anglo-American Corporation in various capacities, including Chief Accountant, for 11 years.
In 1997, he became a commercial manager (Mining and Industrial Division) at Zimasco before rising to the position of executive director (finance) for both Zimasco (Pvt) (Ltd) and Mimosa Mining Company (1998-2007). He served as Vice-President of the Chamber of Mines of Zimbabwe from 2008 to 2011 and its President from 2011 to 2013.executive chairman of Mimosa Holdings since April 1, 2013. He was chairman of Hwange Colliery Company Limited since May 19, 2016.