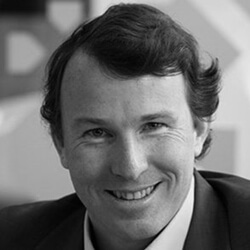 Sébastien de Montessus is President and CEO of Endeavour Mining. Under his leadership, he has introduced key strategic objectives that have created a sustainable business that generates long term cash flow.

Previously, Sébastien served as the CEO of the La Mancha Group for four years between 2012 and 2016. Under his leadership, La Mancha doubled its production through optimization efforts before undergoing a significant portfolio restructuring. Prior to this, Sébastien was a member of the Executive Board and Group Deputy CEO of AREVA Group, a leading nuclear energy company and CEO of AREVA Mining, which focused on uranium assets. He has also served as a Board member of Evolution Mining (2015 - 2018) and ERAMET (2010 - 2012).

Before joining AREVA in 2002, Sébastien was an investment banker at Morgan Stanley in London specializing in M&A and Equity Capital Markets. Sébastien is a business graduate from ESCP-Europe Business School in Paris.

"Driving West Africa’s Growth Story: How Can the Region Continue to Grow its Gold Production While Being Attractive For Other Commodities?"