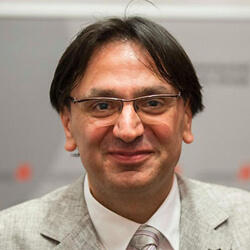 As an engineer with a master’s degree in economics and business administration, Özkan worked at Petroleum, Chemical and Rubber Workers’ Union, which belongs to the Confederation of Progressive Trade Unions of Turkey, for 16 years working at all levels of the union with his last position being Assistant to the President.

As of the beginning of 2007, Kemal Özkan joined the International Chemical, Energy and Mine Workers' Federation (ICEM) in Brussels as Chemical and Rubber Industries’ Officer. Along with his specific industrial responsibilities, in June 2011, he was appointed as Director of Industry and Corporate Affairs of the organization.

He has been active in international trade union solidarity action within global and European trade union federations, including participating in the founding congresses of ICEM and EMCEF in 1995 and 1996 respectively.

Coming from a family of trade unionists, Özkan’s father was imprisoned for four years for union activity during the military coup d’état in Turkey in 1980.

02/03/2020 14:00 02/03/2020 16:00 IGF Sustainability Roundtables - Mining 4.0: How technology and innovation are transforming the mining sector Innovation and new technology in mining is bringing a host of new opportunities and challenges. This session will draw on recent work by IGF and partners to explore two sets of issues in particular: skills and the future of work, and implications for government revenues.

14:10 – 15:00    Part 1: Building skills for a sustainable future
This session will ask what new mining technologies will mean for the future of work: what types of skills will be needed; and how can mining companies, governments and others ensure that locals have the requisite skills to allow mining to make its full contribution to sustainable development?
Moderator: Aaron Cosbey, Senior Associate, IGF
Aiden Davy, Chief Operating Officer, International Council on Mining and Metals
Jörgen Sandström, Head of mining and Minerals, World Economic Forum

"IGF Sustainability Roundtables - Mining 4.0: How technology and innovation are transforming the mining sector"