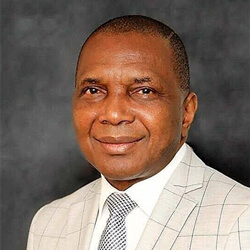 Jean-Claude Kouassi, formerly Chairman of the Board of the National Bureau of Technical Studies for Development (Bnetd), after a stay at the head of the FER's Board of Directors, the Road Maintenance Fund.
Cousin of the late Desire Boni, former Minister of Public Works, and Bédié's companion in the government, he is from a line of leaders from which N'Guessan Kimou, the maternal grandfather (father of Kimou N'Dri Kan), is born of Felix Houphouet-Boigny. Serenity, coupled with humility made man, the son of the deceased Felix Kouassi, head of the village of Broukro-village, despite a natural rather reserved, is a loyalty rarely denied.
Former Minister of the Environment and Forestry, from August 1998 to 1999, this economist, a specialist in international trade, headed CEPICI, the Investment Promotion Center in Côte d'Ivoire, where his predecessor Dosso Moussa was his deputy. He also headed the board of directors of many public, state and parastatal enterprises.
Expert in maritime policy (international transport), development strategy and private investment, eclectic at all times, and brilliant communicator (he speaks several languages, in addition to French and English and is good at negotiating ), he shares his expertise through consulting activities with numerous intergovernmental or international bodies or institutions, including CMEAOC, the Maritime Conference of West and Central African States, UNCTAD, the UNIDO, the World Bank and ECA, the United Nations Economic Commission for Africa, where he was a long-time spokesperson for the African Group and developing countries.
Postgraduate in Economics, obtained at the University of Abidjan, a degree in Marine Commissioner (Toulon, France), as well as many other higher certificates in various fields and specialties associated with these skills profiles , the former director of cabinet of Charles Konan Banny (2005-2007) officiated at the IGT, the Institute of Tropical Geography, University Félix Houphouët-Boigny of Cocody, as lecturer in maritime Economics and policy.