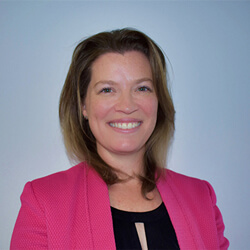 Emma Wade-Smith was announced as Her Majesty’s Trade Commissioner (HMTC) for Africa in June 2018.
Emma has lived and worked in South Africa since February 2016, following her appointment as the UK’s Trade Director for Southern Africa. She created, and has led, the Department for International Trade’s (DIT) pan-African regional trade team since April 2017.

She has also worked on international trade at the UK’s Department for Business, Innovation and Skills (BIS).
Prior to working on trade and investment Emma has had a distinguished career as a British diplomat, spanning more than 2 decades.
Postings include: She was awarded an OBE by Her Majesty the Queen for her work helping British nationals to safety from crisis areas all around the world, as Head of the FCO’s Crisis Response Team.
Emma speaks reasonably fluent Spanish and is working on her French.