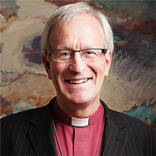 Bishop David is the ninth Bishop of Birmingham. He was inaugurated at St Philip's Cathedral, Birmingham in November 2006. Brought up in the Highlands of Scotland, he first came to the Midlands aged 13 as a pupil at Rugby School where he was Head of School and Captain of the XV.
During his gap year in Idi Amin's Uganda, David's Christian faith became well established.
In 1972 he returned to London and began a ten-year career in the commercial side of BP, taking a degree in Business Studies at Ealing Business School. After an unexpected call to ordained ministry and further study at Wycliffe Hall, Oxford, he served in two parishes in Hull.
From 1992-2000, David was Vicar of Holy Trinity Church Coventry. Here he was also Chaplain to the Freemens Guild, a founder Director of Coventry City Centre Company and a Board Member of Whitefriars Housing. He moved from Coventry to be Bishop of Birkenhead where he chaired the Diocesan Board of Education and Wirral Local Strategic Partnership. He is an Honorary Freeman of the Metropolitan Borough of Wirral.
In addition to his duties as Bishop of Birmingham, he is the Archbishop of Canterbury's Link with China, Prelate of the Order of St Michael and St George and President of the Friends of IPASC (community health training) in DR Congo. David received an Honorary Doctorate of Divinity from Birmingham University in July 2009, is a Board member of Birmingham Hippodrome Theatre, a Council member of Birmingham Chamber of Commerce and is currently chairing the Be Birmingham Summit of the Local Strategic Partnership.
Bishop David is also part of The Banking Standards Board, an independently led body that promotes high standards of behaviour and competence across the UK banking industry.
He is a Church Commissioner and joined the House of Lords in October 2010.
For recreation he walks the Scottish hills, reads history and rides a motorbike - though not all at the same time!

"Interview: Redefining Responsible Mine Leadership - What can the leaders of today and tomorrow learn from the Mining and Faith Reflections Initiative?"